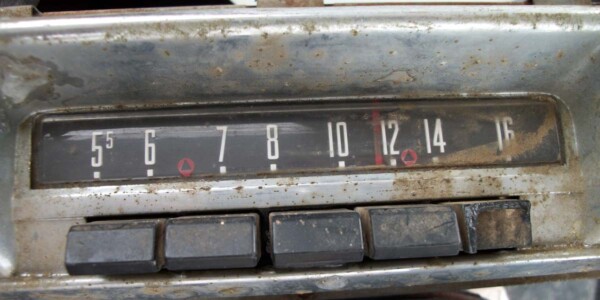 Stealing a quick glance at the AM dial on my car radio and then returning my eyes to the road in front of me. Traffic is light this night, with only a handful of taillights slipping past me on Beal Parkway. My tiny Pontiac, 2 years old but new to me, is riding roughly on worn-out tires. In the days ahead comes a visit to the discount tire place down on 98 next to the Dairy Queen.

My whole life lies in front of me.

Years later I will hear Billy Corgan sing “1979” and know he is singing about this night, because it is October 1979 and I have owned this car only two days after landing my first full-time job four months ago and suddenly everything is changing, in every way. I have transportation, a way to escape the claustrophobia of my former life. I have money – money enough to beef up my savings, to buy a movie ticket and pay for a car. I am young and strong and the world is singing to me about everything, not just dead radio stars. I have love to look forward to. I have the astonishment of discovery, the new world that seems to be shaping itself before my eyes, represented by this amazing music I am hearing on the radio – The Knack, Blondie, New England on the FM dial – and I can’t put it all to words but I know something wonderful is happening to me.

I am changing. I can see farther now. My heart is swelling with excitement.

Cool air rushes into the car. Fall is here and winter is coming. But who cares – I have a car! I can go places. I can do things. The world is limned with possibilities.

The music – thank God for the music. After the long, hot summer of the ’70s, when the stuff coming out of the radio became awful with hard rock, folk, and the horrible disco that lasted only a few years (thank God), a transformation had begun. “My Sharona” and “Heart of Glass” coincided with my emancipation from childhood. They had become my anthems.

So I drive on Beal with only a few other cars and I dream and I know where I am going because I have wanted to go there and now I can – the place where everything I care about is focused. Everything ahead of me, so grand and inexplicable that the fact it cannot be described makes it all the more wonderful. I made it, sort of, and now it is OK, and I think about that, too, when I hear “Video Killed the Radio Star.”

The song reminds me so much of that time, and those are happy memories for me – the glorious, delirious freedom when I didn’t own a damn thing but a crappy Pontiac Astre and the clothes I had just bought from Gayfer’s. I had money but I was always broke. My friends were always broke, and it was a glorious day when Steve’s parents gave him an American Express card and we were able to buy pitchers of beer and a couple of dozen raw oysters at that tired old beach bar next to the Ramada on Okaloosa Island on a gray winter’s afternoon, when the only thing keeping us warm was the candle in the glass holder wrapped in fake fishnet.

Video killed the radio star. When I saw the computer at work, the one with all the wire stories, the news of the entire world, I told myself that if people had one of these things in their homes they’d never buy another newspaper.

Here I am, now, today. Close to the age when Medicare and Social Security become real things to plan on for me, not something I might have heard about on a talk show or read in a magazine story. The music has faded, which suits me because I hate what passes for music these days. I have lots more money than I did in those days but I am still always broke. My car is much nicer than my Pontiac, which I called Blue Thunder. In fact, I have not even bothered to name this latest thing, which could mean I have gotten lazy in my old age or maybe I have just lost the wonder.

Not sure about that. Not sure at all. I still hear echoes of the magic from all those lifetimes ago. I still feel a slight quickening of the heart when certain dreams float to the surface of my thoughts.

It never occurred to me that I am the radio star.

The Buggles were wrong. Video didn’t kill the radio star. He’s still there, waiting for the right time to put on that sparkly jacket and stand in front of the microphone. Or maybe he will appear on a thoughtful night drive on some lonely road.

So tonight, as I came across “Video Killed the Radio Star” and my life flashed before me, I felt inspired to write this about a night long ago, in a beat up old car, when anything seemed possible and the world was filled with wonder.

And you know what?