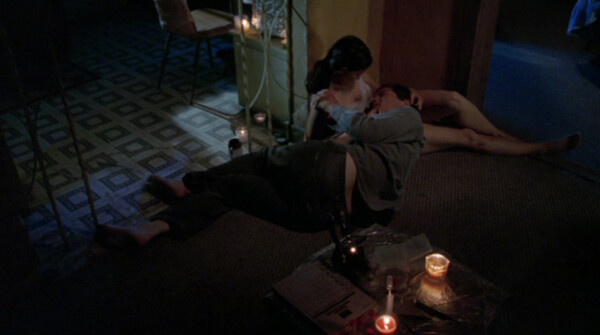 Aside from seeing Ashley Judd naked and one moment of exquisite acting, I’m hard-pressed to find anything good about the movie “Bug,” recently released on DVD.

Granted, I’m no Einstein, but having to turn to the director’s explanation of the movie to figure out its meaning is reason enough to dislike the depraved, violent effort. Then, as it turned out, not even the director sounded like he understood the movie.

“Bug” is incomprehensible because there’s no reference point.

Is Peter Evans, played by Michael Shannon, really an Army soldier gone AWOL after being injected with some experimental concoction that makes him believe he’s being attacked by nearly microscopic aphids? Or is he just crazy?

And, how could he persuade Judd’s character, Agnes White, that she should help, and stay with him, after he contaminates her and her grungy motel-room home with the “bugs”?

Yes, White is vulnerable emotionally because the memory of her 6-year-old son disappearing while they grocery shopped shadows her every move, but would that make her gullible enough to self-immolate, with Evans, to end the movie?

The most sympathetic character in the film, ironically, is White’s abusive ex-husband played beautifully by Harry Connick Jr. in the role of Jerry Goss.

There’s a scene — it’s about two seconds long —where Goss, the wife-slapping ex-con, becomes more sympathetic, even human, than White or Evans ever could.

The moment is played with such stunning heartbreak that, all by itself, it damn near saves the film … damn near but not quite.

Somebody hand me a can of Raid. I’m gonna spray this vile movie until it curls up and dies, like an invading midnight cockroach.

“Bug” is shocking because it highlights the kind of crap that passes for art these days – gratuitous violence inflicted by unsympathetic lunatics on self-appointed victims.

It’s one of those spiral-into-insanity kinds of films that invites us along for the ride. But after seeing this wreck weave back and forth across the center line I bailed and called the cops.

The Judd character is an unlikable victim whom we’re led to feel sorry for – sorry, I didn’t – because her kid was abducted. Her solution: stay drunk and beaten up.

The guys in her life are slimeballs who should be put away in cells – one, prison; the other, padded.

The story is … well, there IS no story. It’s just an extended vignette drenched in mayhem, madness and murder.

No law requires that a movie edify or enlighten. But it MUST entertain, and I ask: What’s so fun about watching two nutcases dissect each other?

Nothing – unless you’re a fan of hernia exams.

Without Del explaining between sets of kicking my butt in tennis what “Casshern” was about, I’d still be scratching my head.

The plot, as it turns out, is semi-unoriginal.

Corrupt politicians of a militaristic superstate collude with malignant corporation bosses to create a dystopian wonderland of carnage where healthy humans are involuntarily used as tissue donors.

Meanwhile, the leader of a small cell of mutants created by a bolt from the Universe that pierced the occluded sky of Earth and hit a vat of artificially growing human limbs promises to avenge the mistreatment he suffered at the hands of government security forces.

Then, from same vat that birthed the mutants, arises a hero.

And, he shall be called Casshern.

Casshern, with his body armor-integrated George Jetson-like rocket pack and morphing helmet tries his dangedest to keep the superstate and mutants from destroying everything, but fails.

The convoluted plot of “Casshern” is tough to follow but the Japanese movie held me captive for no other reason than background details. They were gloriously presented with cinematography resembling a blend of “Brazil,” “Sin City,” and the “Kill Bills.”

In the movie, the society spoke Japanese but wrote in Russian, I think.

Tanks and flying machines are clunky, mechanical beasts as pragmatic and ugly as the imploded society that created them.

The army of robots organized by the mutant leader from leftovers of an earlier conflict march lockstep, their heads adorned with helmets that look like Kraut head gear of World War I.

The landscape, baked by industrial waste, is brown-red-gray. Only the rich enjoy green grass and gardens filled with blooming flowers.

Most striking is the intermodal concentration camp.

The train set is used by the cabal that runs the superstate to store and process the healthies. They’re used as DNA feedstock for a covert genetic engineering program designed to keep the aging rulers alive.

“Casshern” is no fairy tale. It’s bleak from beginning to end. People are nothing more than a commodity to be exploited. The compelling film brims with treachery. And, maybe someday, after I’ve watched it again and again, I’ll understand the plot and its half-dozen subplots.

I came across “Casshern” in the $3 bin at Big Lots and decided to take a chance. I don’t have a problem with anime-inspired stories and I love Japanese horror movies including Hideo Nakata’s “Ring” and Takashi Shimizu’s “Ju-on.”

I won’t reproduce Mladen’s summary of the plot because I think it’s pretty well spot-on. Like Mladen, I had a tough time following the plot – especially with the rapid-fire pacing that meant subtitles appeared and disappeared so quickly I found myself reading more than wallowing in the lush visuals.

And they are lush. Americans aren’t quite acclimated to the look of anime. I can think of only one American director – Ridley Scott – who imbues at least some of his films with a similar attention to visual detail (“Blade Runner” and “Legend”). The intermixing of high-power CGI with live action to produce a poetic vision is something Japanese directors expect the audience to accept. In America it’s CGI made to resemble live action. In Japan it’s CGI that makes no apologies for itself.

Like many anime-inspired stories “Casshern” is a bit heavy-handed with the subtext. Running throughout is a not-so-subtle criticism of science, the stifling hand of cultural authority, the loss of environmental sanctity, and the violence to which humanity seems perpetually addicted.

But there were surprises. The role of parents as enforcers of cultural authority, the impotence of love vs. that authority – these are strange notions to a Westernized society that has been taught the individual trumps the collective.

More than likely “Casshern” is a standard and perhaps cliched statement movie about the triumph of the will … and the hubris of the willful. But if you can get past the convoluted plot, the sometimes unintentionally humorous dialogue (perhaps resulting from a less-than-perfect translation) and the cultural differences that divide East and West, you might enjoy the movie.

What you will enjoy is the “look” of the movie. Almost every frame produced a sense of awe, masterfully crafted by music video director Kiriya. While some may argue “Casshern” delivers empty calories, think of all the empty calories in your life, from french fries to text messages.

I recently watched “Predators” at the movie theater. I spent $9 on a ticket and $6 on a small bag of popcorn. For the journalists among us that’s $15, or five movies from the $3 bin at Big Lots.

I would much rather have spent that $15 on five movies like “Casshern.”