Del and Mladen review ‘Across the Universe’ 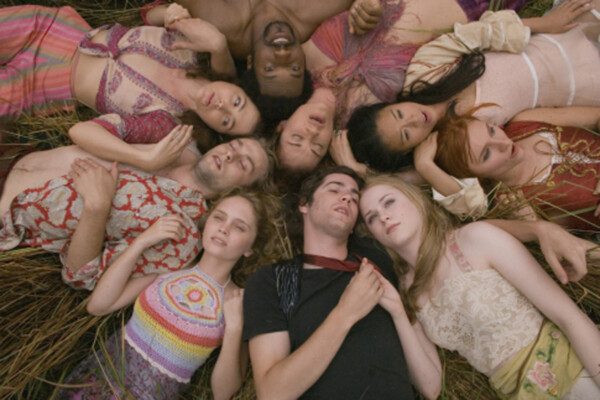 About 15 minutes into “Across the Universe” I decided a review massacre was in order. By movie’s end, however, I had changed my mind. The movie didn’t work for me and I wanted to know why.

I thought about it all night. I used up precious REM sleep grinding my teeth on the issue. And sometime between bedrise and showertime I hit upon the answer:

Its moment had passed.

But not for the reasons you think.

“Across the Universe” is a homage to The Beatles, the ’60s, Vietnam War protests and the civil rights movement. It features Jude, a mop-topped lad from Liverpool who comes to America to find his father, who abandoned his mother in the Old Sod after World War II. Jude meets Max and falls in love with Max’s sister, Lucy. This unlikely trio hooks up with a New York crowd of artists and protesters who experiment with LSD, reinvent music and get clubbed in the head by truncheon-wielding cops.

The characters have an annoying habit of lapsing into song at almost every turn – re-mastered Beatles tunes as it were. The ratio of singing to storytelling is about 10 to 1. Unless you’re a huge fan of the Fab Four you’ll catch yourself rolling your eyes as Jude, frustrated by Lucy’s evolving radicalization by the anti-war movement, manifests his angst through a singing and strawberry-flinging hissy fit.

But the problem with “Across the Universe” is that it no longer works. The Beatles’ were replaced by new wave, grunge, hip-hop and emo. The “turn on, tune in, drop out” moment doesn’t exist. We have another Vietnam raging in the Middle East, and the civil rights movement has become a pale shadow of its former self.

More significantly, young people no longer feel the passion that once energized those social changes.

Back in the 1980s the kids were known as the “Me Generation.” But self-absorption on a cultural scale didn’t exist until the 2000s, when the gadget-pampered, media-beatified children of the ’80s and ’90s came of age.

The young people of the ’60s did what they did, no matter how wrong or stupid, because they were charged with a passion for revolution. At least some of them believed they could change the world.

That’s why “Across the Universe” didn’t work for me. It was like watching Howdy Doody shout, “Hell no, we won’t go!”

When I see mobs of long-haired, placard-carrying hippies surrounding the White House and demanding that Bush pull out of Iraq, I’ll change my mind about “Across the Universe.”

A movie’s place in time shouldn’t influence its entertainment value.

“Across the Universe” is set in the turbulently kitschy 1960s but that doesn’t mean the movie needed to suck in the attention-deficit-disorder 2000s.

Sweeping aside Del’s huffing and puffing about our selfish, publicity-seeking youth by noting that’s what all youth everywhere are at any given moment, leaves only the prospect of reviewing “Across the Universe” on its own merit.

The movie is little more than a montage of The Beatles songs. It would have been tolerable if more nudity and violence were offered, but that’s only two of several mistakes.

The creators of “Across the Universe” took Fab Four tunes and built a movie around them.

What they should have done was write a coherent script and cherry-picked The Beatles songs that fit. The result could have been both a good movie and a celebration of the Fab Four.

That said, I should come clean with a couple of prejudices.

First, the only thing good about The Beatles was Paul McCartney and that’s only after he founded Wings. “Live and Let Die” is one of the greatest songs ever.

And, second, “Across the Universe” fails to use The Beatles most whimsical and charming song, “Yellow Submarine.”

How can you produce, direct or act in a movie featuring The Beatles songs without using “Yellow Submarine?”

“Across the Universe,” in part, uses Vietnam War-era unrest in the United States as a component of its shtick.

“Yellow Submarine” could have been the song that gaps the inane decisions made by politicians back then with the gallingly obtuse decisions made, and being made, by the Bush administration today.

That would have had two effects.

First, Del might have been less grumpy in his review of “Across the Universe” because it had a link to the present.

And, second, the movie would have helped me survive the next 10 months of Bush.

After all, couldn’t we all “sail on to the sun until we found a sea of green and (live) beneath the waves in our yellow submarine” prosperously in international waters until Jan. 21, 2009?