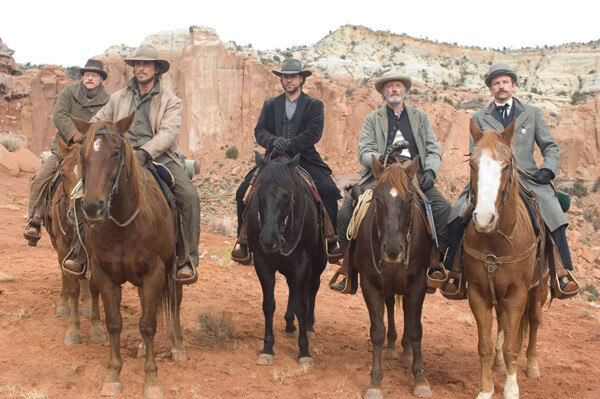 The good guy died and I didn’t care.

The bad guy lived and I didn’t care.

There wasn’t much to care about “3:10 to Yuma,” a cowboy movie bullet-holed with silliness.

The plot: A hapless rancher somewhere in Arizona stumbles into becoming part of a posse delivering a murderous, Bible-quoting outlaw to a train depot. There, the bad guy is supposed to be put on the “3:10 to Yuma” for delivery to a federal prison.

Almost from the get-go, the well-received (for reasons beyond me) movie starts to smell like a roadkill mule basking in the desert sun for two weeks.

For starters, the posse planned its escort of the intelligent killer much like the Bush administration planned for the Iraq invasion.

No kidding, there must have been at least a half-dozen opportunities for bad man Ben Wade, portrayed by Russell Crowe, to escape or just plain old stab, strangle, blow up or shoot all the men taking him to the train. He only kills a couple and that was because one took his horse and the other insulted his mother.

Wade faced a hangman’s noose but acted like he was taking a horseback tour of a playland inhabited by greedy railroad barons and bloodthirsty Apaches.

Oh, he’d mutter something now and then about his gang coming to save him but I kept asking, why?

My children’s guinea pigs could have saved themselves from the posse guarding Wade without intervention from our backyard squirrels, so why did the mastermind behind dozens of stagecoach robberies need his band of baddies to rescue him?

Throw in standard Hollywood fare such as really good looking women always being attracted to murderers, as well as absurdness like a father’s need to impress his son by dying and the movie almost cascades into farce.

By the way, the 3:10 train to Yuma is about five minutes late, so the director could squeeze more loony violence into the film.

Dang and dadgum, the movie was rotten as a polecat in heat.

The DVD box claimed “3:10 to Yuma” was the best Western since “Unforgiven.” All that must mean is that no one had made a cowboy movie since Clint Eastwood’s bone fide award-winner in 1992.

The way I see it there are five basic movie western plots:

1. Ex-gunslinger forced to strap on his six-shooter.

3. Ornery land baron steals water/land/cattle/women, must be made to pay.

Fortunately, “3:10 to Yuma” does not embrace any one of these hackneyed plots. Unfortunately, it embraces ALL of them in a Frankensteined pastiche of cliches, revisionism and logic flaws that left me wondering if Hollywood will ever again tell a decent story.

In “Yuma” we have English actor Christian Bale tasked with bringing Australian actor Russell Crowe to Yuma, where he will board a train and be taken to jail. What’s the matter, Hollywood? Couldn’t find an American actor?

Bale is a milquetoast kinda guy disliked by his bloodthirsty 14-year-old son, who wishes Dad would grow a pair and blast the bad guys to smithereens. Crowe is a hard-drinkin’, stagecoach-robbin’, murderin’ varmint who somehow gets caught and shipped off to Yuma in a long and perilous journey fraught with escape opportunities and conniving Native Americans. Close behind is Crowe’s gang, led by his eerily amoral No. 2 who bears an uncanny resemblance to every James Bond bad guy’s triggerman.

Let’s do a cliché check:

No. 1 – check. Bale is a former soldier who wants to spend his golden years cowpoking. No. 2 – check. Crowe is the menacing bad guy who rides into town, runs everyone out of the saloon, corners the local hooker … you get the picture. No. 3 – check. Bale is just a poor rancher who needs money or his ranch will go under. No. 4 – check. We get lots of philosophizing and empathizing on the hegira to Yuma. No. 5 – check. Two sieges – count ’em – TWO!

The movie ends with a totally unbelievable moment of moral clarity that could only have been dreamed up by a scriptwriter who wears peach-colored Polos to yoga practice.

This stinker was more aggravating than entertaining. I give it 10 yawns.