Del and Mladen review ‘Alvin and the Chipmunks’ 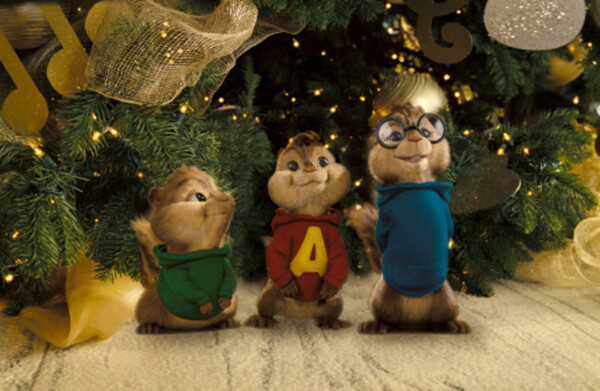 Simon, Alvin and Theodore beam at the prospects of their first holiday together with Dave Seville.

I spent more time watching the clock than “Alvin and the Chipmunks.”

But hey, it’s a kids’ movie … a 92-minute long kids’ movie that takes three days and a barf bag to watch.

Seriously, I found no fatal flaws in “Alvin and the Chipmunks.” I’m sure it’s a perfectly serviceable kids’ movie – despite the tired, hackneyed, derivative plot elements that seem cut and paste from about every animated/CGI-generated kids’ movie of the past 10 years.

In “Alvin and the Chipmunks,” our three favorite rodents (not counting Bush, Cheney and Rumsfeld) show up at the home of failed music writer Dave Seville (Jason Lee) and wreak havoc. Dave shows them the door – but invites them back when he discovers they can sing … just the “latest thing” to galvanize his music career.

From there the movie becomes a predictable and boring pastiche of cliches – the chipmunks become rock stars and are exploited by greedy businesspeople … Dave starts to think of the chipmunks as his kids … Dave nearly loses the girl but with the chipmunks’ help gets her back … blah blah blah.

Sorry, but I just couldn’t overlook the property damage, career setbacks and disgusting personal hygiene issues wrought by these rodents. Fart jokes and eating a poop? Pass the Pepto-Bismol.

At my house these rats would be singing the blues as I sic the cat on them.

Maybe I liked “Alvin and the Chipmunks” because it had only one fart gag.

Maybe it was the clever scene where Alvin inhaled helium from a balloon and his voice got lower.

Maybe I like the film because Del doesn’t. What’s the big deal about Simon eating Theodore’s poop pellet, anyway? Aren’t chipmunk’s vegetarians? So, it’s not like the pellet was all fetid and putrid with flies swarming.

“Alvin and the Chipmunks” is funny much of the time and avoids being annoying, no small feat because the chipmunks’ testosterone-less voices could drive a person nuts.

“Dave,” played by Jason Lee, does a good job of imagining the singing rodent trio exists.

The same skillful ability to see what isn’t there is applied by the bad guy music industry executive exploiting Alvin, Simon and Theodore for all they’re worth. As it turns out, the money isn’t in the singing but the merchandising.

Nor does the movie wear out its welcome by being too long or using double entendre to appeal to adults.

The chipmunks are the film’s only CGI, adding a sense of reality that makes the movie feel authentic even if grumpy Del insists the plot is re-tread.

If you have kids, don’t rent the movie, buy it.

“Alvin and the Chipmunks” is very likely a film they’ll want to see more than thrice, which means it’ll pay for itself in no time.